How NOTA BENE helps to solve the situation of homeless people?

What is it good for?

Civic organization Proti prúdu has been established by three university students of social work on 20.3. 2001 with aim to help homeless people integrate into society, to work on the prevention of homelessness and positively impact public attitudes towards homeless people. The main and first project from 2001 – publishing street paper Nota bene, gives monthly chance to get a decent income, self-esteem and social contacts to 300 homeless people in 17 towns in Slovakia. In Bratislava, we provide by 5 social workers individual social counselling, as well as counselling in groups or through streetwork activities. We offer homeless people access to the computer, internet and telephone, correspondence address, we contribute to cover the costs of prescripted medicaments etc. In cooperation with partners, we also provide pro bono lawyer assistance. Since 2001, we have worked with more than 3,500 homeless people in Bratislava. Thanks to strong vision and financial stability, there are other pilot projects we started and implemented or helped to found in Slovakia there. In 2007-2011 we operated outreach program Streetwork (now it is operated by NGO Vagus), we started Theatre Nota bene with homeless people (now it is operated by NGO Homeless Theatre), in 2005-2007 we have provided to Nota bene vendors worksheltered jobs with accommodation in a complex project Krištof. In 2006 we helped to found low-threshold nightshelter St. Vincent Depaul and we are cofounders of Daily center St. Elizabeth from 2011. From May 2014 we realize project of employement and debt-delevering of homeless people - Luggage porters at main railway station. We are active in cross-linking organizations working with homeless people, we prepared several proposals for law amendments and managed to change the laws, in 2015 we organized our 7th annual international professional conference on homelessness on employemnet/debts/housing issue and we have publish 3 books based on our experience. We organize cultural projects to change public perception on homelessness (e.g. Homeless ball.) Our vendors represented Slovakia several times on The Homeless World Cup in football. We believe it is important to give voice to homeless people. We have published 5 books written by our vendors, invented with them the table game on homelessness, in 2014 we published first illustrated children’s fairy tale book on homelessness and our trained vendors go to the discussion in schools to speak on homelessness. The overall yearly budget of our organization is +- 460 000 eur. 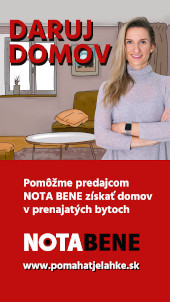